A small twin-engine aircraft L-410 was tested recently at the Barneo station. Actually the plane is not new; production started in the late 60s at Pust Factory, Czech Republic, as a part of the CMEA programs.

The aircraft has been modified several times over the years; production scale varied widely. Few years ago a lack of light and maneuverable airplanes suitable for unprepared ground, grass or snow runways was realized in Russia, and the L-410 was called to memory, not least because it proved itself to be reliable in tough weather conditions and capable of taking off and landing on shorten runways.

In 2013 a license agreement was signed between the Czech manufacturer and the Ural Civil Aviation Plant (UZGA), Yekaterinburg. UZGA has got the right to manufacture and modify the L-410. Few days ago a plane with serial number 002, equipped with a ski landing gear, assembled in Yekaterinburg, has landed at the Barneo Airport after a flight from Moscow through Murmansk and Nagurskaya (Franz-Josef Land).

The tests were successful: the plane proved its efficiency when using on snow and ice runways. 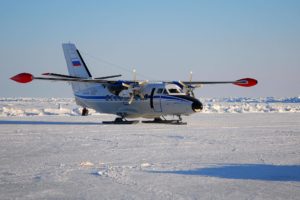 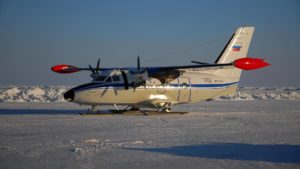 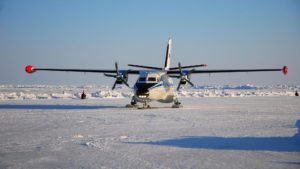