Ирина Орлова from the Barneo station:

«The weather started to change when we reached Barneo three days ago. It seems like there is an open water somewhere near the station. A kind of whitishness has appeared through it in the air, and humidity has increased. Maybe it’s because of a full moon that happened on Tuesday — it is well known that ice starts to move at the time of a full-moon. Our expedition leader @Виктор Серов (Victor Serov) noticed that many ice lanes appeared on the way to the North Pole. And it’s broadcasted from the route that they meet many bears (bears procure food in ice lanes, keeping travellers up all the while). Each group is equipped with some weapons to guard against that sort of invaders.

During the last few days four sanitary flights were organized to evacuate travelers injured by finger frostbites. I’ve noticed an illogical fashion among some skiers: they wear latex gloves under mitts in order to keep hands wet. I always thought that modern-day sportswear is intended to carry water away thus keeping a body dried. So latex gloves appear as a new spin on ski equipment. Maybe that was the reason of these frostbites… Anyway, it’s getting warmer now and there’s no need in sanitary flights anymore 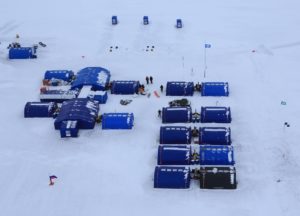 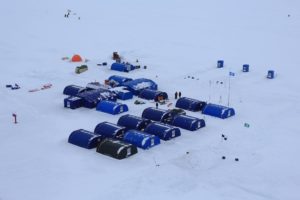 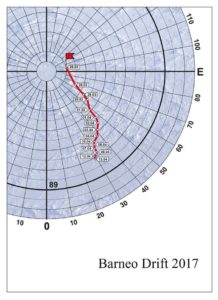