Analyzing the main results of the just-concluded season "Barneo-2018" can be confidently characterized by his Chekhov phrase: "Brevity is the sister of talent," supplemented with a short but very important word... and luck! ". But, as they say, "lucky for those who are lucky!". And we - the organizers of Barneo for all the long six months preceding the season, carried this heavily weighted after Alexander Orlov passed away and eventually won!

The main difficulty with which we had to face was the search for a helicopter company, ready and able to perform the entire amount of flight work to organize and support the activities of the Barneo Ice Camp. Sudden and inexplicable from the point of view of common sense, the refusal of the airline “Aerogeo”, which has been cooperating with us for the last 6 years from the participation in the Barneo Project, has put us in front of the urgent need to find an adequate replacement. In view of the extremely limited time and specificity of flight operations in the high-latitude Arctic, this turned out to be an extremely difficult task. Of course, we primarily applied to airlines with a sufficient fleet of helicopters and work experience in the polar regions, and there were very few such, much less than we say 10-15 years ago. As a result of intensive searches and consultations, we managed to find a small but actively operating air company «Yeltsovka» based in Novosibirsk, which with enthusiasm and willingness responded to our proposal. We signed a contract with her, conducted the necessary consultations and training of the crews, in a word, did everything necessary for the helicopters to fly to the North in the unfolding of Barneo, established by all the previous experience, on March 17-18. But, on March 6, the Federal Air Transport Agency (Rosaviatsiya) refuses to agree on a plan for the flight of the helicopters of this airline, citing the insufficient level of training of both helicopters and crews for flights in the Arctic Ocean. The next two weeks were entirely devoted to attempts to convince Rosaviatsia to cancel its decision but in vain. The project was put on the verge of failure because we were already behind schedule for almost two weeks. 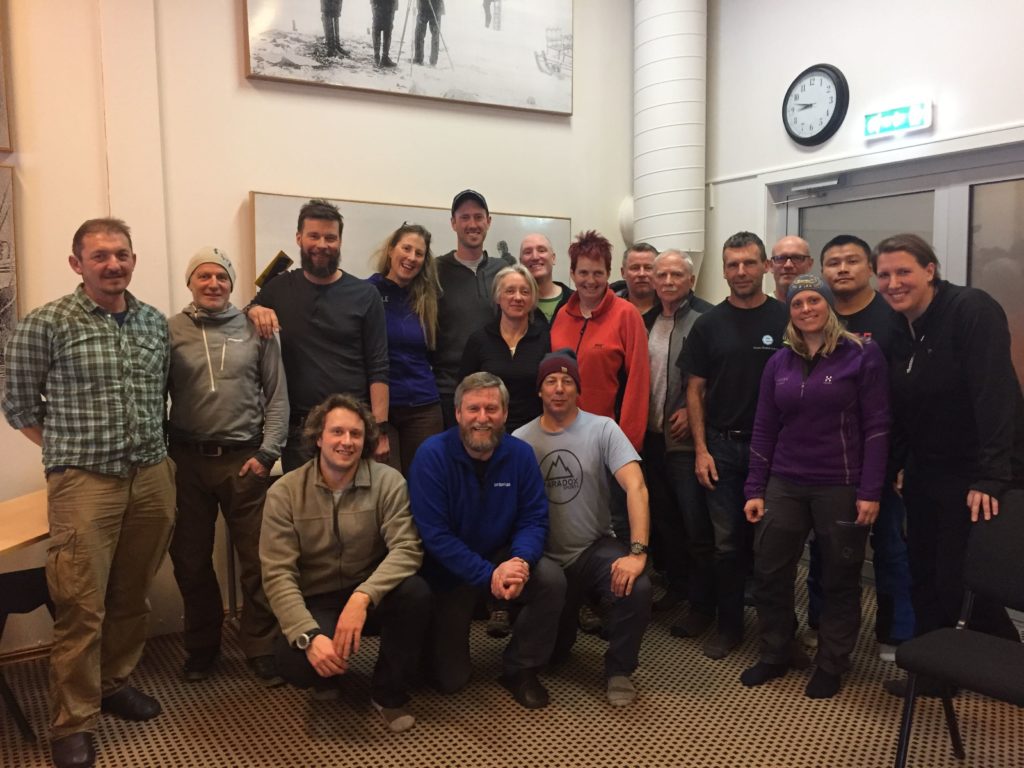 It is clear that in such conditions there could be no question of implementing Barneo’s programs in the announced terms, it was about the survival of the project, the continuity of its activities, which continued for 25 years. We had no doubts that the project should be continued, even in this shorter version, it was much more difficult to prepare all the numerous (more than 200 people) project participants for the forced change in the announced schedule, connected to them all with changing their plans, canceling air tickets, bookings in hotels and so on. On March 29, after long negotiations with the UTair Aviation Company, which was fully supported by Rosaviatsia, and received from it guarantees for the flight of helicopters to the North no later than April 5, we decided to announce that the Barneo 2018 season will be delayed ski programs and marathon for about 10 days and tourist programs for 2-3 days. And this is natural in case of favorable weather and ice conditions, which at that time, and indeed, no one could guarantee, of course, could. And this is where the luck mentioned above just worked! Helicopters managed to skip a very insidious from the point of view of the weather section of the Dixon-Sredny island flight route and on April 7 they landed safely in the intermediate ice camp at coordinates of 88 degrees north latitude and 95 degrees east longitude. Then everything went on without any delays either — the fuel was dumped and the impact group was dropped to the Polus region and the search for an ice field suitable for the construction of an icefield began. It should be noted that this year, on the initiative of the leader of the group of airborne and parachute works of the Barneo project Dmitry Glagolev, we first used the trackers of the Iridium system to accompany both helicopters and the IL-76 aircraft, which provided airborne assault. This allowed us through the Internet to monitor all the evolution, both helicopters, and aircraft. And on April 10, a long-awaited message came from the ice scout Tomasz Petrovsky, that the ice floe was found. True, its linear dimensions of 1, 2x 1.3 km were not large enough, but the thickness e turned out to be 180-190 cm, which is a great rarity in our time for annual ice! This thickness set in a positive way and gave confidence that the ice runway would last the required two weeks, and therefore it was decided to build a strip on this ice floe. Its coordinates on April 13 were 89 degrees 34 minutes north latitude and 108 degrees east longitude-that is, just over 50 kilometers from the North Pole! Two tractors and three tractor drivers, working round the clock, built the strip for 3 days, and the first technical flight of the AN-74 aircraft with the inspector and part of the equipment of the Barneo camp flew to the ice on April 13 in the afternoon (we were not up to superstitions!) ! Further, working in shifts by two crews, we made 6 flights in a row at intervals of 6 hours during April 14-15 and practically got on the updated schedule. 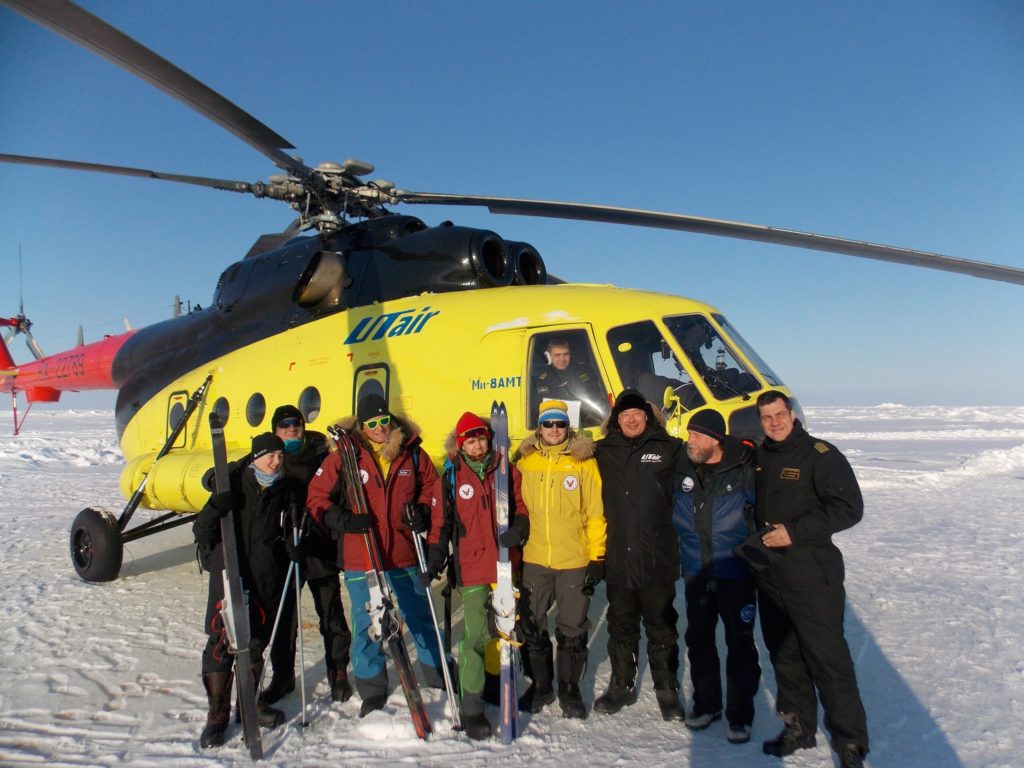 The landing of the ski teams according to the program «The Last Degree» was carried out practically in the mode from «the wheels of the aircraft» to the helicopter. Two helicopters worked at once, the landing of the groups was carried out on 135 and 140 meridians of the eastern longitude to ensure a favorable drift to the ski groups and at a distance of 110 km from the Pole. It should be noted that the airline «UTair» provided for work two brand-new beautifully painted MI-8AMT helicopters equipped with crews who had vast experience of working in temperate latitudes but did not have practical experience in the Arctic Ocean. And the crew coped brilliantly with this difficult task. Thus, during the night from April 14 to 15, over ten groups of skiers with a total strength of 70 people were landed on the ice. In addition to the «usual» ski teams, which included both men and women, led by well-known polar guides Eric Phillips (Australia), Thomas Ulrich (Switzerland) Dixie Danserkoern(Belgium), Eric Larsen and Keith Heger (USA) and others. This season, the Pole was “attacked” by a purely female team led by Felicity Aston (Great Britain). It is noteworthy that the composition of this team was truly multinational and apart from the representatives of Europe it included the beautiful representatives of the countries of the Arab world (Oman, Saudi Arabia, Qatar), for whom this difficult journey in such unusual conditions was a real challenge! 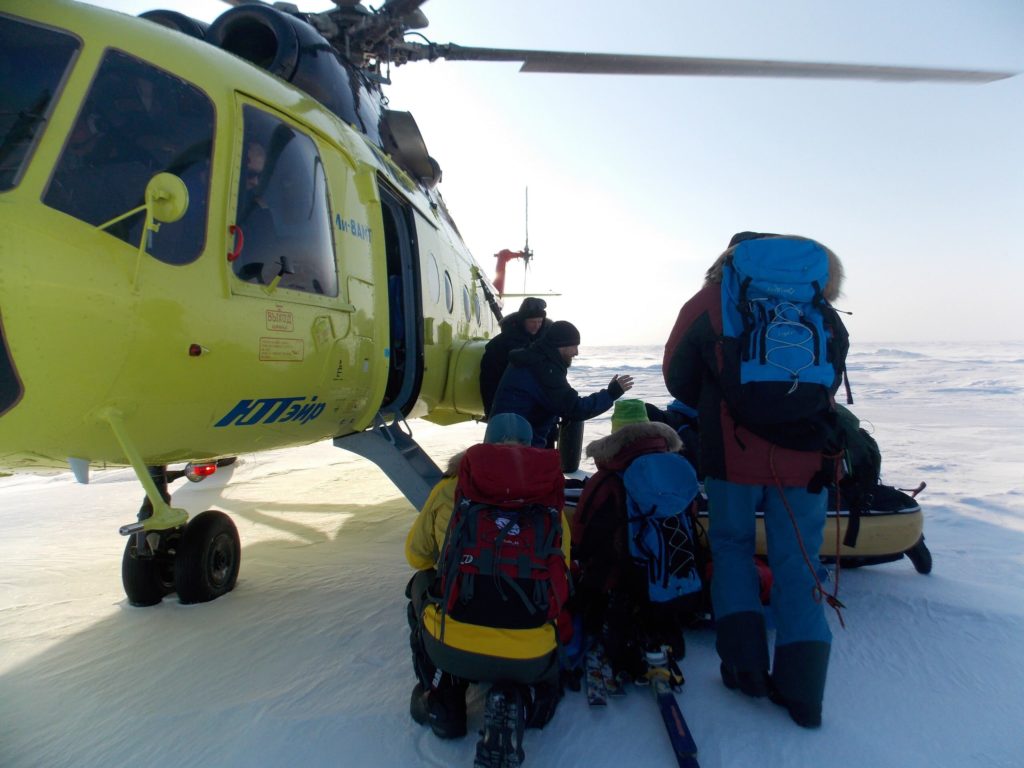 This and almost all the other ski teams have safely reached the Pole. Only one team, consisting of representatives of China, was forced to withdraw from the route due to injury to one of the participants. And again, to the question of luck — the ice situation in the Polus region was extremely favorable for skiing — there was practically no open water, the weather was stable, and the drift was insignificant — this allowed most of the teams to complete the program before the deadline. In fact, all the groups came to the Pole until April 22! Later, everyone in this season — on April 19, started a group of young skiers under the leadership of Matvey Shparo, but they completed the route on April 25!
In the period from April 15 to April 17, a traditional marathon took place, in which about 60 people took part! 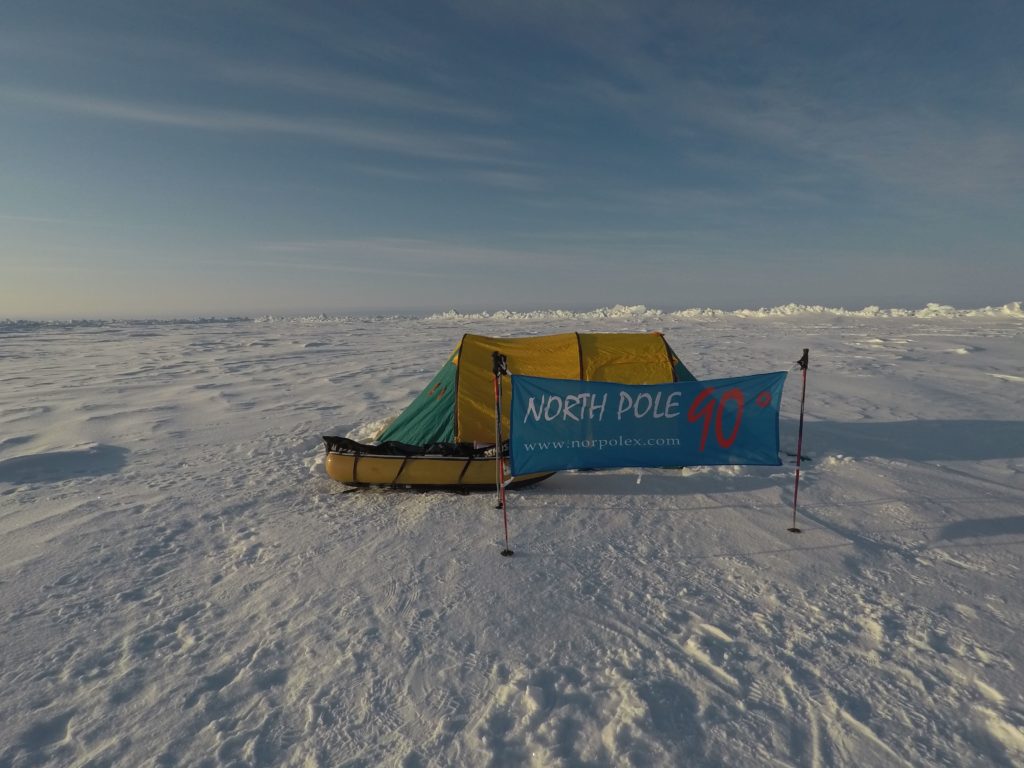 On April 16, an event occurred in Barneo, the probability of which, considering the thickness of the ice floe and stable low wind, was insignificant! But it happened! Literally, 40 minutes before the landing of the next flight of the AN-74, from our wonderful strip of 900 meters long, a piece of 150 meters in length, noiselessly and every day, broke off, which made the strip, to put it mildly, not quite suitable for take-off and landing of the aircraft. The plane turned back to Spitsbergen, and we started urgent repairs on the strip.
They were involved in extending the strip at least 150 meters in the opposite direction from the fault (the crack diverged by a meter and stopped). A certain reserve in this direction was made during construction, that is, this site was cleared of snow. The problem was represented by a height difference of up to 25-30 cm between the old strip and its continuation. Therefore, it had to be leveled, and it was possible to do this only by filling the unevenness with sea water. We immediately started to work. Unfortunately, the air temperature rose to 20-22 degrees, which significantly slowed the freezing of seawater pumped from the well to the ice floe.
A little less than a day and a half passed, and the ice on the leveled section was still weak. The length of the «healthy section» of the strip was 740 meters, and the commander of the AN-74, the most experienced pilot, Yury Amelin, decided to try to sit on it. His attempt was crowned with success, and the flights resumed. Only now, each time the plane poured from the planes 7-9 barrels of kerosene, to reduce the take-off weight!
April 17 evening a group of French scientists arrived — led by a famous Russian oceanographer Sergei Pisarev. On April 18-19, the ice camp of Barneo was filled with numerous tourists, whose program included visiting the North Pole, and at the very end of the season -22-24 April a «round-the-world» trip on bicycles took place in the Polyus area. After the completion of the route by a group of skiers Shparo, the camp of Barneo was dismantled and taken to Spitsbergen. On the afternoon of April 25, the last AN-74 flight was made, helicopters took off from the ice and headed for the remote Sredny island, which they safely reached after 5 hours of flight over the drifting ice. Season Barneo 2018 completed and the great merit of the entire team Barneo — Irina Orlova and Dmitry Glagolev, Margarita Tertitskaya, «UTair» and «Sharl», paratroopers Centrospas (Murmansk), the crews of 224 air squadron of Defense Ministry, the technical team Barneo under the leadership of veteran Oleg Gordychuk, the company «Vikaar.» In difficult moments of negotiations with Rosaviatsia, the President of the Association of Russian Polar Explorers AN Chilingarov helped a lot. 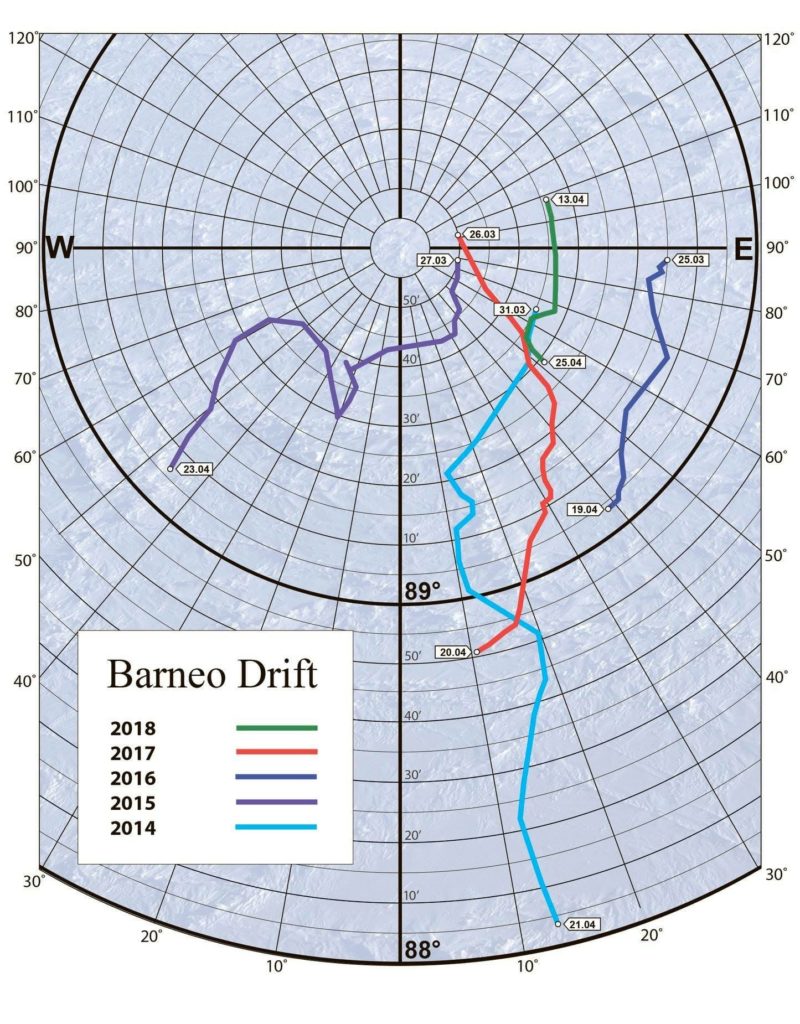